After I got out of the service in the early 80s I lived in Jersey and worked in the City. Deli’s were everywhere and an important part of most New Yorker’s lives. They are where you got a bagel with a smear for breakfast, made to order sandwiches for lunch, and something to eat on the train home in the evening. I was excited to learn a New York Deli was opening just down the street. When we rolled up on that opening weekend and saw the line out the door I stopped by during the week.

On the day we stopped in at lunch time the bagels were not available because there was a problem baking them and Tom and Suzie felt they were not good enough to sell. While I applaud their commitment to quality I am not sure I would have left them in the racks on display. After you see them and are told you can’t have one its torture as you mind thinks you’re dreaming or this has to be Candid Camera. But I get that it’s a tough call for a shop owner trying to make the most out of a bad situation. Leaving them out gives them the opportunity to explain to customers something went wrong and they value their customers enough not to sell them sub-standard food. Suzie gave my wife a cannoli to try and she said it was the best she has had.

On a later visit my bagel was flawless and brought back memories of my days working in New York City. Lightly brown on the outside with a slight crunch and moist but not doughy on the inside. Bagels are best eaten as soon after they are made as possible, try to get them early. I remember being in a deli not long after I landed in New York City. It was late afternoon and I asked the old man behind the counter for a bagel with cream cheese. He looked at me like I was insane and finally said “how about some nice pastrami?” I asked what’s wrong with the bagels. He said “kid, after 3 hours their junk.” They were still edible but to this old bagel maker fresh was the only option.

Tom and Suzie make about 20 flavors and experiment with new ones like French toast. They offer 10 to 12 varieties of Suzie’s home-made cream cheeses. Plain, onion, and garlic bagels are their biggest sellers but the chocolate chip bagel with chocolate chip cream cheese on one side and peanut butter on the other is catching on.

Farm-to-table is all the rage these days but in the city it’s more about deli-to-table and Tom & Suzie’s sandwiches are great. My favorite is the meatball sandwich with your choice of cheese. Home-made meatballs the size of pool balls are cut in half and served hot on your choice of bread. The recipe comes from Suzie’s mother and was probably handed down from relatives in the old country. They are really good. 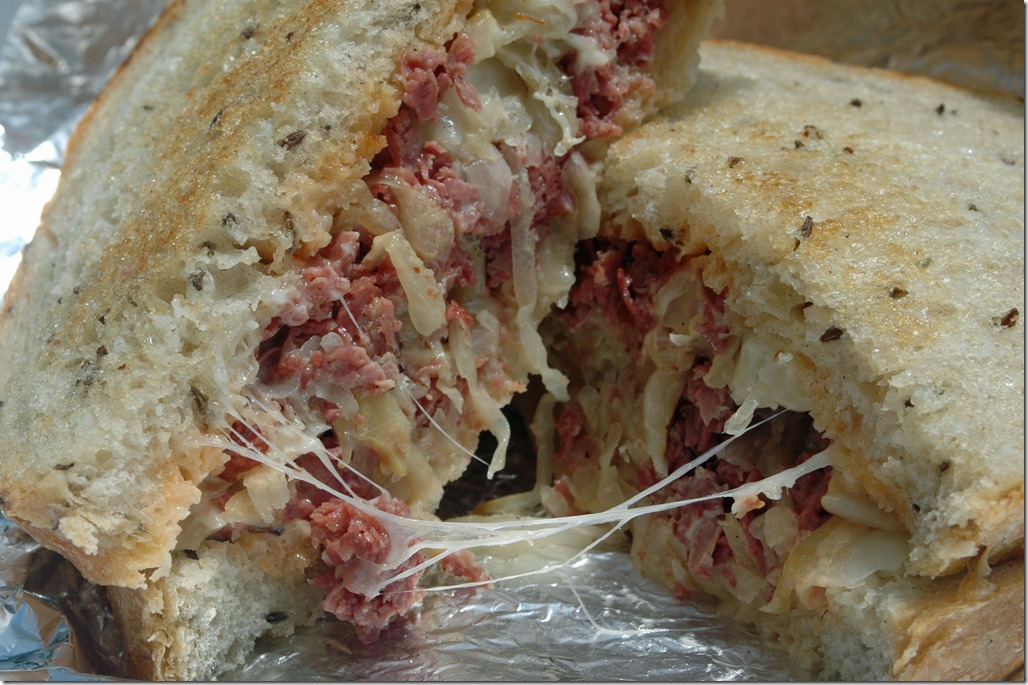 I also enjoy this Angry Paramedic sandwich. It is similar to a  Ruben with Corned Beef, 1000 Isle Dressing and your choice of cheese and Cole Slaw or Sauerkraut. They put pastrami on it for a little extra taste and it’s unexpectedly good. Not traditional but a nice twist.

Before stopping by I looked at the Facebook and Yelp posts about the deli. I was surprised to see people so hard on a new place. Many start with “I really want to see them succeed, but” and then the hammer comes down and you would think they were serving prison food over there. There are few complaints about the ingredients which is not surprising since they use high end Boar’s Head meats, cheeses, and cream cheese. A few mention the bagels are underdone but most are happy with the bagels. The number one complaint is the service is slow.

On a recent visit I sat down with Tom and asked him about the problems and the social media feedback I was seeing. He told me the opening weekend was brutal. The point of sale program was giving them problems and they were overwhelmed with customers. Many more than they had expected which caused them to run out of cream cheese. This resulted in a flurry of “What the hell kind of deli runs out of cream cheese” comments on social media. He also told me it has been hard to find employees. They have hired several young people who they trained but wouldn’t follow directions.

They should never run out of cream cheese again. On the day I visited they had 360 pounds of Boar’s Head cream cheese in the cooler. Tom feels some critics are needlessly harsh, especially comments about getting someone in there who knows how to run a deli. He worked in a deli for years while in high school and he and Suzie worked for a month at a friend’s deli in Long Island to understand the processes. He points out that each sandwich is made to order by freshly cutting the meat and cheese rather than using pre-sliced products. This adds time to the order process but the key is getting enough employees that will follow direction and work quickly. Transplanted New Yorkers are used to faster service in a deli because they are mostly family owned businesses flush with their kids and cousins making sandwiches. Even Northern Virginians who have never been to a deli are almost always in a hurry. Trying to find the right balance between overstaffing and reliable employees is a challenge Tom and Suzie must meet. After talking with them I believe they really want to provide the best service they can.

I have to wonder had the name been a little different, maybe something like Tom & Suzie’s Handcrafted Artesian Made While You Wait Sandwiches you would have heard less complaining.